This project is a result of a long term collaboration with Nick Phillips, a consultant neurosurgeon at the Leeds General Infirmary. A basic skill that trainee neurosurgeons need to gain early in their training is an appreciation of the ventricular system in the brain, and how to cannulate it in an emergency. The flow of cerebrospinal fluid can be obstructed in the ventricles by many pathological processes leading to a dangerous condition known as hydrocephalus. The pressure within the ventricles can rise, leading to loss of consciousness. The ventricular system can be cannulated in the operating theatre, fluid drained and the potentially lethal rise in pressure relieved. This procedure is a commonly performed in neurosurgical departments.

We originally created a web-based training tool for practicing the above procedure. However in 2010, Llyr ap Cenydd who was then working for me in the Advanced Medical Imaging and Visualization Unit, ported the training tool to the iPad. The ‘VCath’ app enables trainees to improve their understanding and skill set needed for the procedure before having to perform in the operating theatre. A validation study that we conducted demonstrated that training using this cost effective simulator does help to improve the accuracy of the trainees(John et al., 2015). It provides a convenient platform for repeat practice, anytime, anywhere. 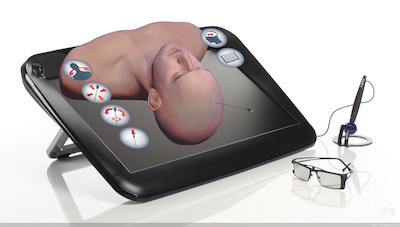 Depiction of a stereoscopic version of VCath implemented on the zSpace display. Currently we are working on a higher fidelity version of the training tool that uses the zSpace holographic screen (John et al., 2016).