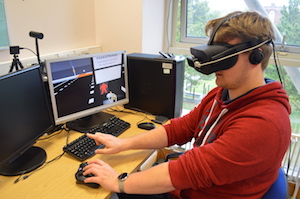 The Oculus Rift was the first of a new generation of affordable Head Mounted Displays (HMDs) that started to appear in 2015. Just after I moved to the University of Chester a few of us (me, Serban Pop, Panos Ritsos, Chris Headleand, and my new PhD student Tom Day) discussed possible uses of the Oculus Rift and we came up with the idea of building a VR environment for training driving skills for users of powered wheelchairs. This was particularly poignant for me as my father had to use a powered wheelchair in the latter years of his life.

We have subsequently built an application called Wheelchair-VR. It uses the Oculus Rift to immerse users in a variety of different driving scenarios, a gamepad for the joystick interface that controls the wheelchair, and the LEAP Motion for hand interactions. Currently we have carried out a successful validation of the application with able bodied volunteers. We are continuing to add more functionality to the software and exploring issues such as reducing cybersickness when using a HMD.

More information is in this paper published in IEEE TVCG (John et al., 2017), and will also appear here as the project develops.