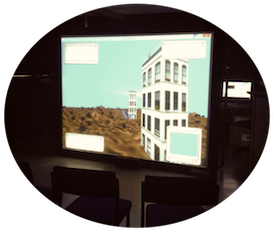 Fourteen years after the VIP Lab I enjoyed the challenge of building another large scale visualization facility and comparing the advances in technology and fall in prices. The Powerwall facility that I built at Bangor used a flat screen (1.83m x 2.44m) with rear projection. The screen had previously been used in the School of Chemistry but they no longer required it and the original projection system that they used needed to be replaced. We wanted to provide support for stereoscopy, but for ease of use, to do this with a single projector rather than a separate projector for each eye. 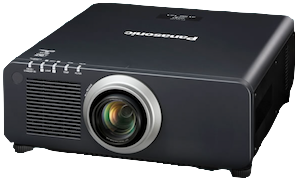 Our chosen solution was a Panasonic DLP projector (model no. PT-DZ87OELK) with a short throw lens. This was the most expensive purchase for the powerwall system, at £13K. The projector has a stereo mode (1024 x 768, 120Hz refresh rate) and is rated at 8500 ANSI lumens. Since lumens is halved when using active stereo, then it was important to have a high output for a bright 3D image. The short-throw ratio of the lens is 0.8 - 1.0:1, allowing us to minimise the distance needed between the projector and the screen.

To synchronise the stereo output with shuttered glasses, we used a multiprotocol infrared emitter (the DI619 emitter) with angle of radiation 60° and range 8m. A particular advantage of this emitter is that is supports the inexpensive NVIDIA 3D Vision active shutter glasses. 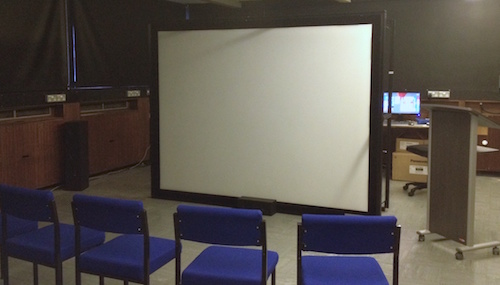 A high end gaming PC was purchased to drive the projection system and run the graphics applications. For £3K we obtained a quad core CPU, with 16GB RAM, a blu-ray drive, 2TB hard disk, and NVIDIA Quadro K5000 GPU. The IR Emitter is connected directly to the VESA port on the graphics card using a ZNT cable (VESA MiniDIN 3-pin to BNC). Twelve pairs of NVIDIA 3D Vision glasses and a surround sound system with amp completed the installation. We already had a PST optical tracking system in the department, which we repurposed for any tracking requirements.

The total cost of this installation was under £20K. Compare this with a cost of over £600K for the VIP Laboratory in 2000!